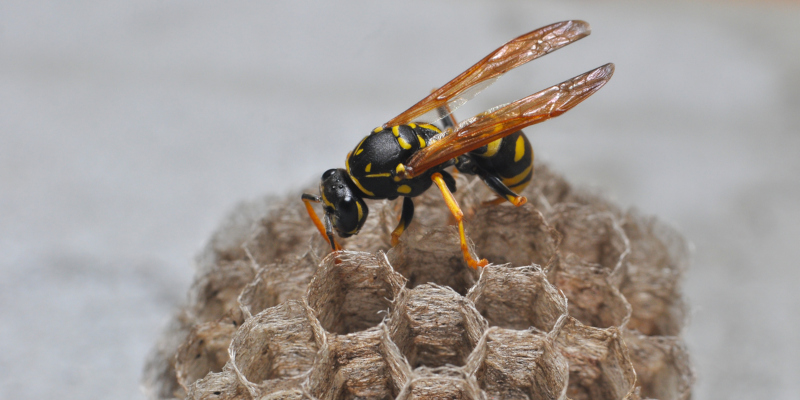 Have you seen honeycomb nests being built along your roofline and want to take action before anyone gets stung? Before you act, we urge you to do some research! It could either be wasps or bees that you are dealing with, and there are some major differences between the two that should change how you treat the problem. Bees are vegetarians, surviving on pollen and nectar. They are typically nonaggressive and will not sting unless provoked or defending the hive. Wasps, on the other hand, are notoriously more aggressive than bees and are actually carnivorous. Wasps will forage for food in trash cans and prey on other insects.

It can be hard to tell if you have a wasp problem or a bee problem because of the similarities between the two—they have the same coloring, make a buzzing sound, and some wasps even form hexagonal honeycombed hives just like bees do. So, when trying to identify which species you have on your property, look for the differences. Bees are fuzzy whereas wasps have sleek, shiny bodies. Bees are rounded in the middle while wasps have a smaller waist. Bees form their hives out of a honey-colored waxy substance, but wasps find material such as mud, leaves, etc. that result in a gray hive.

We think it’s safe to say that a bee problem is not nearly as concerning as a wasp problem. But we understand that homeowners want to avoid the risk of being stung, no matter which species it is. We depend on bees to pollinate our food crops and flowering plants. It is vitally important to our farming economy and food production that we protect the bee population. If you are dealing with a bee problem, we highly suggest getting professional help to relocate the bees instead of exterminating them. Do the responsible thing and feel good about how your choice will help the environment.