Our team can assist you by providing high-quality bee removal in Palm Harbor.

Bee Removal in Palm Harbor – While bees are a natural and healthy part of many ecosystems, it can also be a pain when they try to take over at your home or business. What’s the best way to get rid of the bees without causing major damage to them or your property? Live bee removal saves the bees and is environmentally necessary – but it can also be a difficult job. Rather than taking on the task of trying to complete bee removal on your own, our team can assist you by providing high-quality services in Palm Harbor, Florida. When you call us at BeeMan Stan, you can feel confident that you’ll be able to take back your indoor and outdoor spaces, and the bees that once swarmed are safely removed.

If you suspect you have a bee problem, or if you are ready to schedule bee removal services at your home or business in Palm Harbor, give us a call at BeeMan Stan, and we’ll be there to help you right away! We have an excellent one-year warranty on our cleanout services, and we’ll work with you to take back your property inside and out.

Palm Harbor is home to bees, bees, and more bees!  We have helped many people and businesses with bees in walls and bees in trees in Palm Harbor. The most common bee we see in Palm Harbor is the Honey bee. Honey bees will make their bee hives in the soffit of roofs and can be dangerous to by passerby’s. Bees will also become a hazard to the structure of the building if they are not removed. Bee hives can grow by up to a pound per day and the bees themselves can mine through wood beams. If you find a bee hive in your house, do not attempt to spray the bees or remove the bee hive yourself. Contact a bee removal company in Palm Harbor to do the job for you. Bees can be dangerous and it is best to leave it to a certified professional. We have removed many bees in Palm Harbor and will be happy to help with your bee problem today.  We are licensed and insured to remove bees safely and efficiently. We also have a one year guarantee on all of our clean outs. 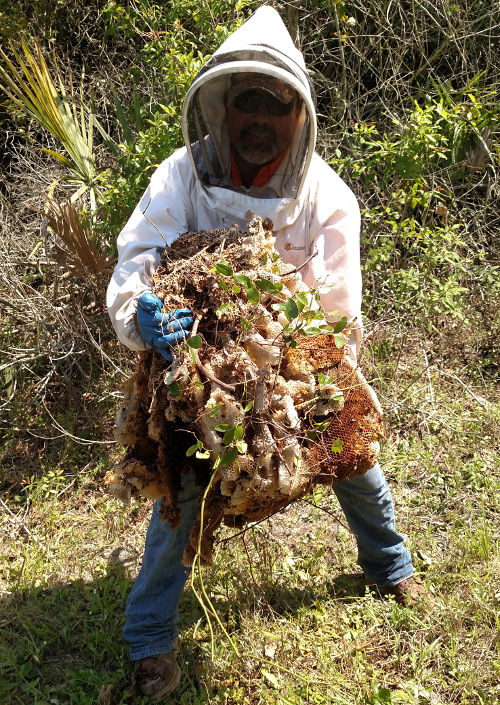 We can remove bee hives from trees and other hard to reach places that require lifts or other aerial equipment. Call us at (727) 744-1527 for any bee removal needs in Palm Harbor.

The bumble bee is a species of bee common to the majority of the northern hemisphere but is actually very rare in tropical areas. The bumble bee thrives in temperate climates due to its ability to regulate its body temperature. Bumble bees can actually use solar radiation, shiver, and cool themselves. Because of this, bumble bees are not very common in Palm Harbor or other parts of west Florida. This doesn’t mean you might not cross paths with the bumble bee in Palm Harbor, because they are sometimes found. All six subspecies of bumble bee native to Florida can all be found in the Palm Harbor area and all six bumble bees can be identified by their pale gold and black colored bodies, large eyes, and completely hairy, large bodies. 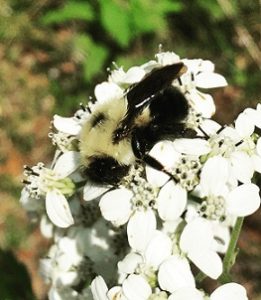 Honey bees are often the biggest nuisance because they like to build their bee hive in walls and roofs. However, honey bees are an important part of the ecosystem so it is important to always save the bees and relocate when possible. Fossil records have led scientists to believe that honey bees originated in Southeast Asia and then migrated to Europe. Today, honey bees are found all over the world and are frequently transported by beekeepers from one field to another to pollinate crops.  Honey bees will build a honeycomb to house their larvae and to store their honey and pollen. Within the first week, a honeycomb can weigh around three pounds and can continue to grow by up to a pound per day.  When honey bees build their hive in your house, it is important to remove the honeycomb in addition to just the bees. If the honeycomb is not removed, it could attract new swarms of bees. Bee Man Stan has removed honeycombs from under floors, water heater boxes, attics, and other unique areas. We always do our part to save the bees in Palm Harbor.

By far the most recognizable type of bee here in Palm Harbor, Florida, the honey bee actually has territory expanding all of Florida and even the majority of the United States. The Western honey bee in particular is the most common honey bee worldwide, and the most common here in Sarasota. Coincidentally, the Western honey bee, or European honey bee, is not native to the Americas. Instead the honey bee was domesticated long ago in Europe, Africa, and Asia, and has spread around the globe for its production of honey. Honey bees are recognizable by their trademark honey bee black and yellow striped pattern. Additionally, honey bees are generally short in length, have small hairs all over their body, and unlike wasps and hornets, the honey bee has a proboscis protruding from its mouth, which is used for the ingesting of pollen and nectar.

Like humans, the honey bee loves warm weather (not tropical) even though they are accustomed to temperate climates. The honey bee becomes dormant in the winter but the longer the warm months, the longer the honey bee is active. Because of this, honey bees flock toward Florida for its warm climate and flora galore, which honey bees utilize for pollen. Whether domesticated or wild, the honey bee centralizes its hive around a queen honey bee. The queen honey bee gives birth to all the drone and worker honey bees. The hives which they create, which you may have seen at some point here in Palm Harbor, tend to be in confined areas such as tree hollows or even your own chimney! Because of their love for confined dry areas, you might stumble across a honey bee hive in your Palm Harbor home.

If you do need bee removal in Palm Harbor, call Bee Man Stan to remove the honey bees from you home and relocate the honey bees to a secluded area. They are often given to beekeepers for honey production. Honey bees are integral to our ecosystem and should not be harmed but carefully removed and relocated. Western honey bees not only produce delicious honey, but in Florida and many other areas of the world, the honey bee is the key pollinator in nature. In fact, the honey bee pollinates around 30% of the food we eat. That’s equivalent to $15 billion. 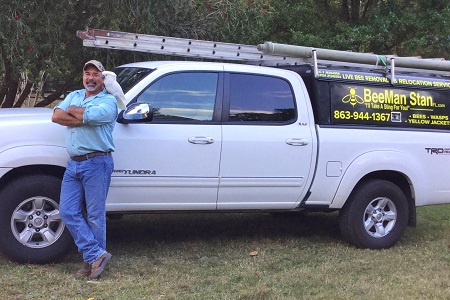 We offer bee removal seven days a week and accept all forms of payments.
Contact us today for bee removal in Palm Harbor. 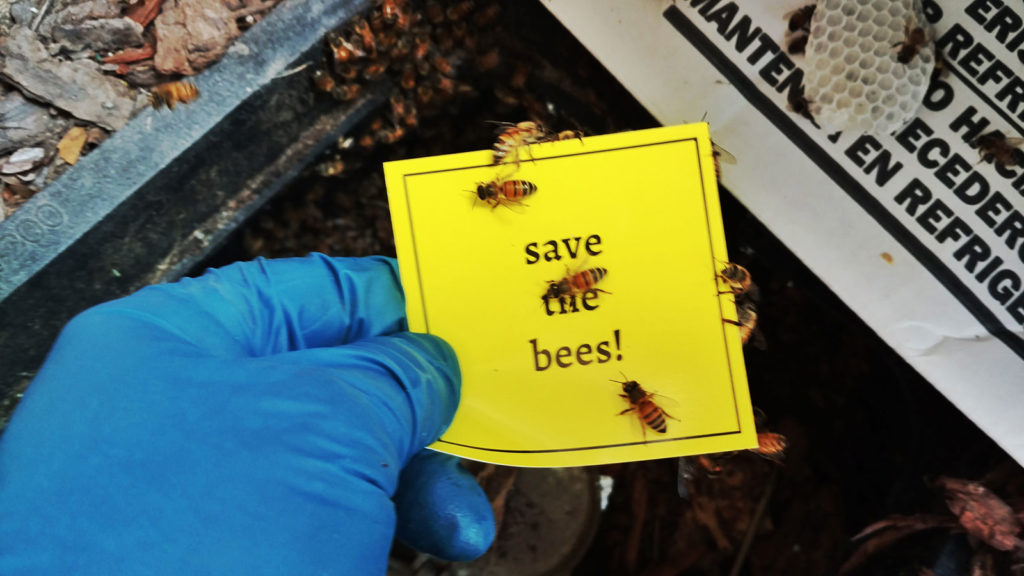